PLACES OF WORSHIP
F - Path suitable for families
Lenght: from 1 to 3h 00

Beauty and spirit language, art is a way to understand the most profound roots of the history of La Thuile.
Its recurring elements accompany art lovers from a hamlet to another to discover places of worship.
A leap into the past and a journey of faith that, starting from the year 1000, has narrated the vicissitudes of the people that lived in this border area.
Some nice routes, to be done on foot, by car or by shuttle (during the winter), start from the Church of Saint Nicholas in the center of the town and bring to the chapels of the various hamlets in La Thuile. They follow two main itineraries: the first one towards the Colle San Carlo, until the hamlet of Buic; the second one towards Pont Serrand, along the street that goes towards the Little St Bernard pass. Two routes that stretch along the only ancient way to communicate with France: the “Via delle Gallie consular road”. The ancient chapels, built between the XVII and the XIX centuries, embellish La Thuile streets by harmoniously combining themselves with the surrounding landscape. They all depend on the Saint Nicholas parish church, the upholder of many precious sacred objects.

From the Tourists Office go towards Entrèves by crossing the bridge on the Rutor torrent. This position -
between the Rutor and the Verney torrents - originated the name of the hamlet. In fact Entrèves means
“between the waters”. The patron saint of the neo-gothic styled chapel of the hamlet is Saint Barbara [7]. She was
venerated by its inhabitants because they though she protected it from the ruinous fire of 1794, which completely
destroyed the other villages. The actual building is almost one hundred years younger (1876). The statue of the Saint
is located of the wooden altar together with Saint Joseph, but she is also represented on one of the five paintings that surround the altar. The painting by Vauterin with the martyrdom of Saint Erasmus is really interesting. The sculptural Pity, dating back to the XVIII century and that is now in the sacristy of the parish church, also comes from the small chapel of Entrèves. This small, tiny building was renovated in 2011 thanks to the intervention of the Alpini of La Thuile. The structure close to the chapel, dating back to the XIX century, is another must-see, as well as the country house and the dairy farm opposite. These buildings are characterized by hip roofs.
From Entrèves go towards the hamlet Petite Golette to reach the chapel of the Visitation [8]. This scene is represented on a painting of the XVIII century and is located in the wooden altar of the same period. The statues of the Crowned Virgin, Saint Nicholas, two angels with the instruments of the Passion and a golden, painted sculptural
group of the Pity (XVI century), made by a sculptor from Aosta, are in deposit at the parish church.
After having followed the national road which brings to the Little St Bernard pass for three kilometers, there is the
hamlet of Pont-Serrand. The actual bridge dates back to 1872, but there already was a viaduct during the Roman
epoch: it was indispensable - as it is today - to go over the profound rocky gorge where the Verney torrent flows.
In the angular space delimited by the old and the new road towards the pass there is the chapel of Saint Bernard
of Menthon [9] (the patron saint of alpinists and wayfarers), on whose façade there is a painting representing
Saint Bernard who holds a dragon in chains at bay. Built for the first time in 1471, the chapel was rebuilt during
the XVII century: in its internal, there is another sculpture of the Saint on the altar.
The real peculiarity of the chapel is the grating that separates the area reserved to the priest and the one for
believers: it is the unique example of this kind of divisor in the area of La Thuile. The whole village deserves an
accurate visit: even if the buildings have been renovated, the architectures of the past are still recognizable,
both the houses along the street - which were mainly used as habitations - and the external rural structures,
like the ruins of the mill of Pont-Serrand, which was anciently set in action by a hydraulic wheel. 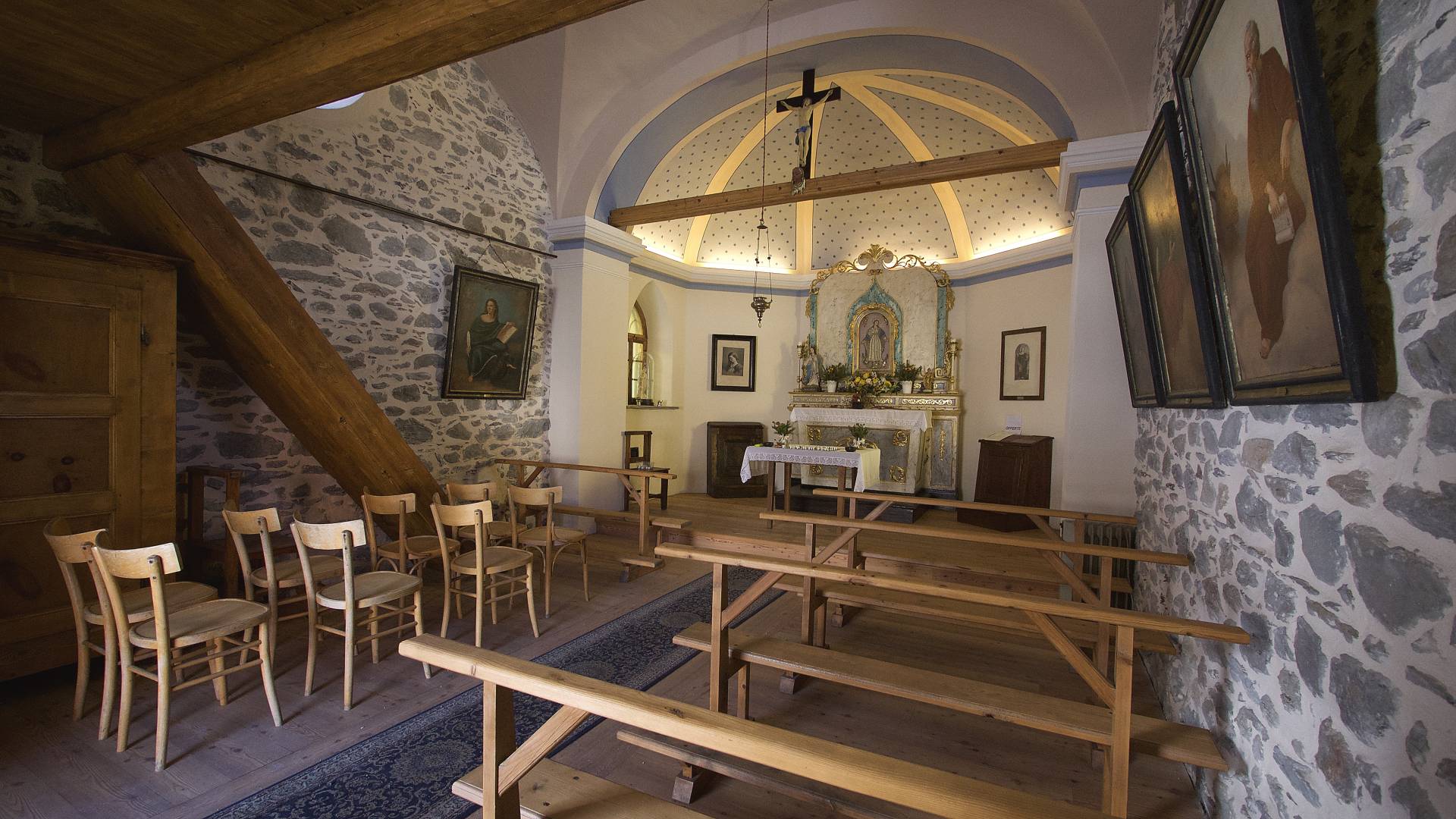 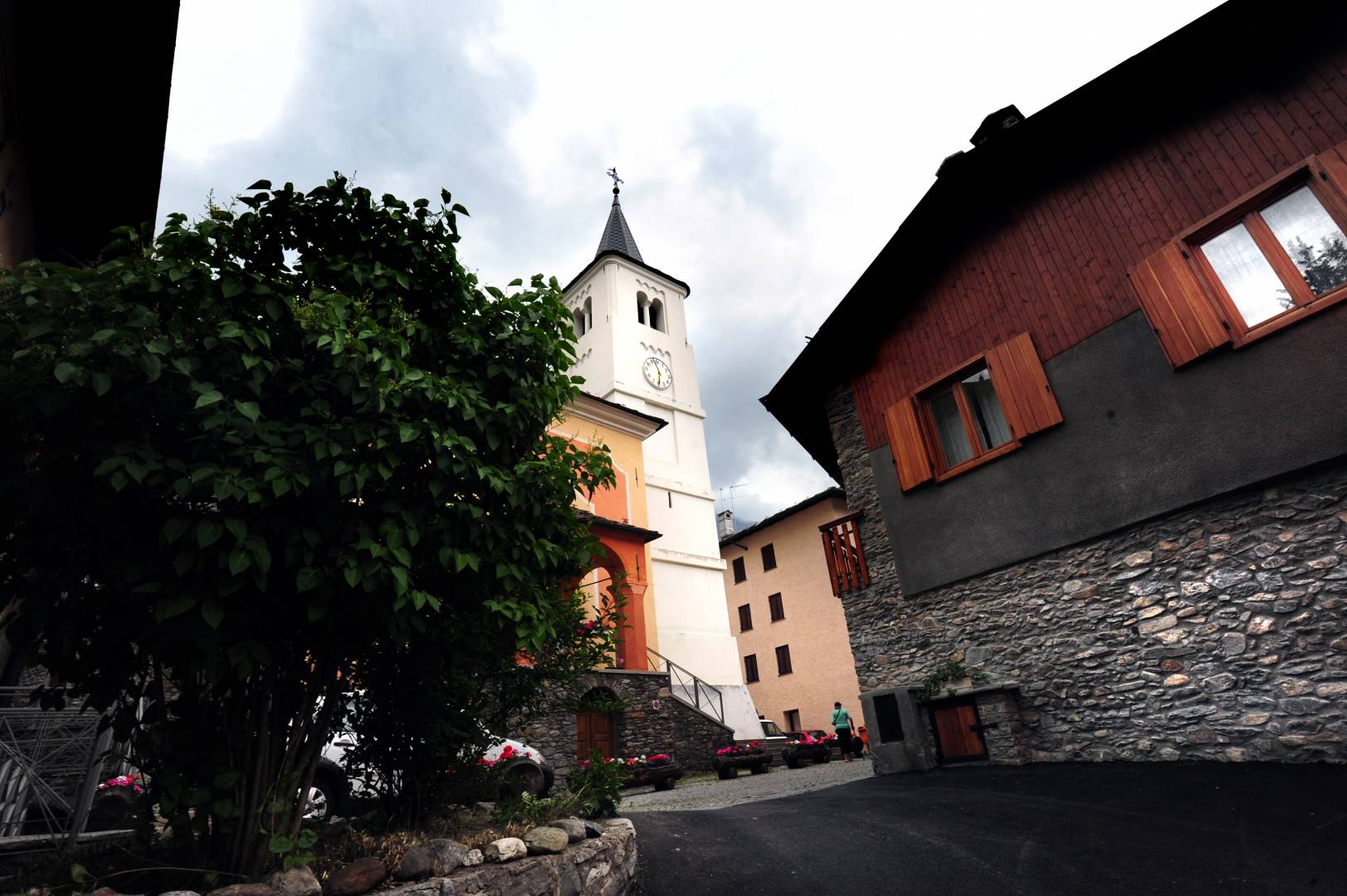 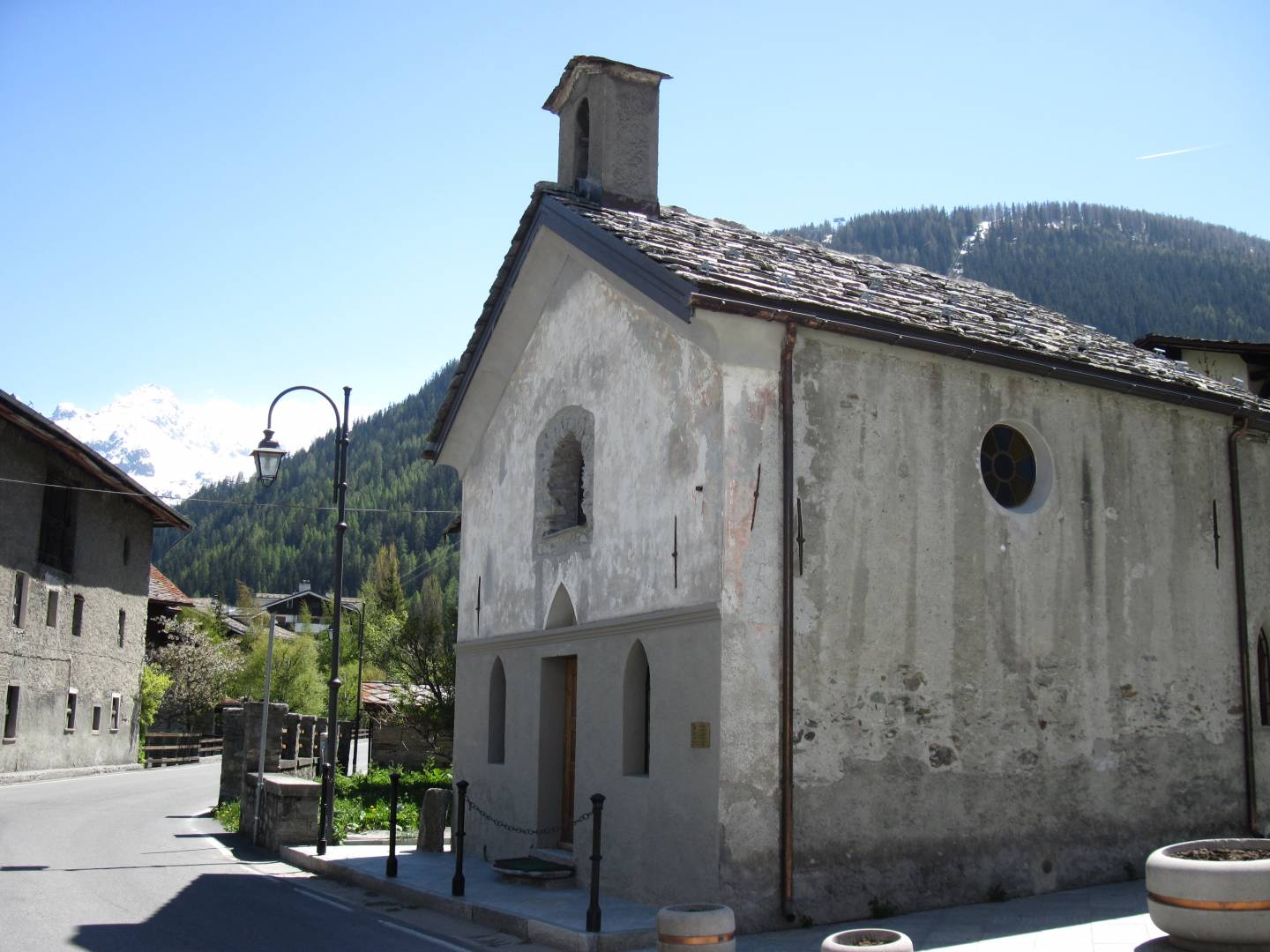 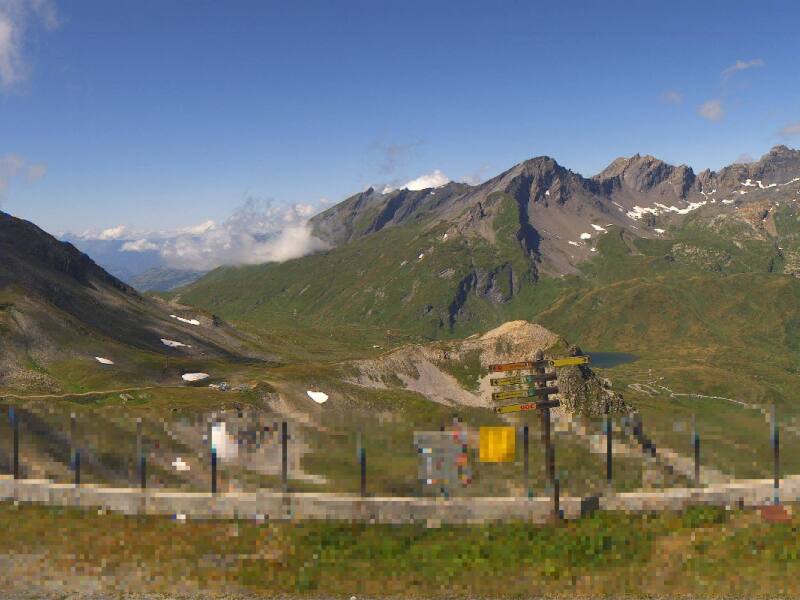